By recruiting designer Rob Koelewyn, the Hong Kong saltwater specialist says it has the ability to develop reels ‘beyond anything we could have imagined’ – starting with two new launches for 2015.

Following his successful collaboration with Blue Marlin last year, top reel designer Rob Koelewyn has joined the saltwater tackle manufacturer on a full-time basis. The move paves the way for the Hong Kong-based big game brand to expand its product offering even further. Last year Koelewyn, one of the world’s top reel designers and the man behind the launch of the Van Staal and ZeeBaaS brands, was the mastermind behind the design of Blue Marlin’s BMC-70 and BMJ-70 jigging and casting series of spinning reels.“We are expanding the brand with the introduction of another two new spinning reel models – a new offshore jigging and casting reel series alongside a totally new sealed, lightweight spinning reel that will target the surf and inshore boating market,” said Blue Marlin CEO Vlad Kartov.

“Rob has designed both models and they are currently being produced. The offshore reel series are due for release later this year and the new sealed waterproof spinning reel will be available early in 2015.” In addition to the reels, a new brand has been established for Koelewyn’s fly series. The RK (Robert Koelewyn) fly reels will consist of four sizes of freshwater and four saltwater models. Fully waterproof, ‘aesthetically- pleasing’ and light, they will be extremely functional. The saltwater versions will be robust, rugged and able to cope with the hardcore demands of the sea. The RK brand is jointly owned by Blue Marlin and Koelewyn, who is coming off the back of an awardwinning ICAST, where his latest freshwater fly reel design was recognised in the Product Showcase. Koelewyn will also be designing two pairs of pliers for launch later this year. The first will be an eight-inch heavy-duty model made of machined aluminium with titanium jaws and quick snap-in replaceable side cutters. These will be sold under the Blue Marlin banner. Alongside will be a 6.5 inch version made from solid titanium with snap-in replaceable cutters. Sold through both the RK and Blue Marlin brands, they will retail at approximately half the price of comparable products on the market. Kartov added: “The new products that are being released over the next six months will catapult Blue Marlin into a new realm. With many more product ideas for 2015 and beyond, we feel that Robert’s pedigree from years of building brands will serve to boost his and Blue Marlin’s fortunes even further in ways that we could only have imagined before.” Koelewyn has told Angling International that deliveries of Blue Marlin’s much-anticipated series of jigging and casting series of spinning reels will start before the end of the year. Initially, there will be three sizes in each series: BMC/BMJ 60/70/80 and these will be followed by sizes 30/40/50. He said: “Blue Marlin is known for its high quality tackle and this new spinning reel series is no exception. We started out by demanding that this reel must meet our high expectations by ensuring a strong aluminium machine-cut base frame and powerful and smooth gears, alongside the best bearings.“The main spool shaft is made from the highest grade aircraft stainless steel available, plus all the small internal parts are built from a high grade stainless steel and naval brass. This all ensures that the series will have a long life under the harshest saltwater conditions.” The series also features multiple patent-pending ‘V’ Rail technology on the slider movement, powerful and smooth gears along with best bearing, floating spool shaft, precision machine-cut drive gear, 30kg of drag powerand dual bearing support for the pinion gear – making for a powerful and extremely robust performer. 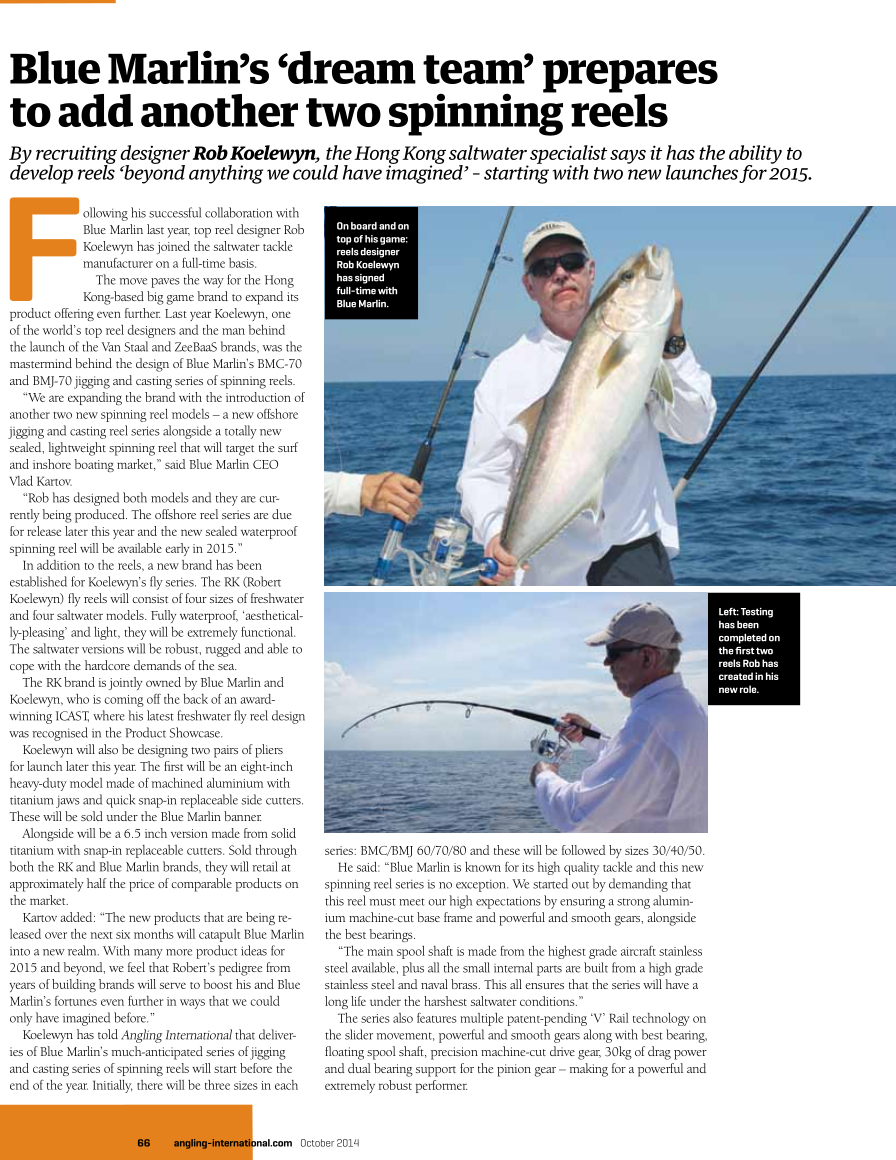